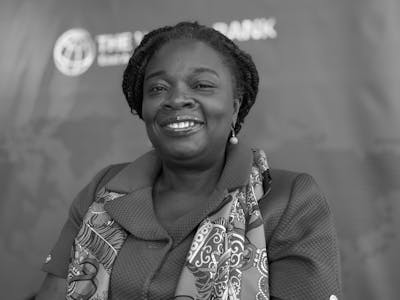 Victoria Kwakwa was appointed World Bank Regional Vice President for East Asia and the Pacific (EAP) in April 2016. Prior to this appointment, she was World Bank Country Director for Vietnam.

In her role as Regional Vice President for East Asia and the Pacific, Ms. Kwakwa leads the World Bank’s engagement in the 23-member countries in the region focusing on private sector led growth, human capital development and inclusion, and sustainable and resilient development.

Under Ms. Kwakwa’s leadership, the World Bank’s EAP region has given strategic priority to how countries in EAP move to higher productivity growth models, including through effective use of technology; addressing childhood stunting and improving learning outcomes; transitioning to cleaner energy paths and tackling the growing problem of marine debris. She has also focused on deepening partnership with regional bodies such as ASEAN and with other development actors in the region.

Ms. Kwakwa has led work on a range of economic policy issues such as economic competitiveness, fiscal management notably in resource rich economies and fiscal decentralization.

Since joining the World Bank as a Young Professional, Ms. Kwakwa has had several successful assignments as economist, country manager and country director in East Asia and in Africa. She has extensive field experience in Nigeria, Rwanda and Vietnam.