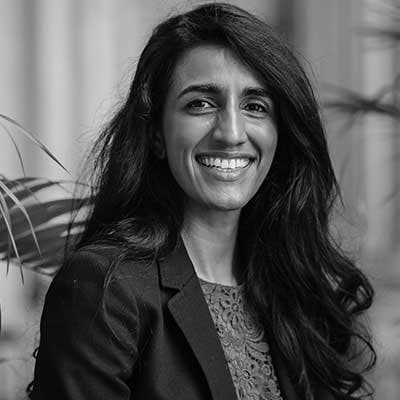 Dr. Ayesha Khanna is Co-Founder and CEO of Addo, an artificial intelligence (AI) solutions firm headquartered in California. She has been a strategic advisor on artificial intelligence, smart cities and fintech to leading corporations and governments. Ayesha serves on the Board of Infocomm Media Development Authority (IMDA), the Singapore government's agency that develops and regulates its world-class technology sector to drive the country's digital economy and power its Smart Nation vision. Ayesha is also a member of the World Economic Forum's Global Future Councils, a community of international experts who provide thought leadership on the impact and governance of emerging technologies like artificial intelligence.

Ayesha is an active advisor to smart city projects and technology companies. Ayesha serves on the board of AVEVA Group, a British multinational technology firm that is a global leader in industrial software. AVEVA is listed on the London Stock Exchange and is a constituent of the FTSE 100 Index. She also serves on the board of NEOM Tech and Digital Holding Company, which is responsible for formulating the vision and delivery of the technology infrastructure (which includes AI, robotics, blockchain, and virtual reality) for NEOM, the $500billion smart city under development in Saudi Arabia.

In 2014, Ayesha served as a member of the Singapore’s Ministry of Education’s steering committee that resulted in SkillsFuture, an innovative national program that aligns education with economic demand, career guidance and lifelong learning to prepare citizens for the fourth industrial revolution. She serves on the Board of Ngee Ann Polytechnic, a leading polytechnic in Singapore with 44 full-time programs through 9 academic schools and a student population of almost 15,000.

Ayesha is also the Founder of 21C GIRLS, a charity that delivers free coding and artificial intelligence classes to girls in Singapore. Programs include Code in the Community, a program sponsored by Google and that has taught thousands of children (8 - 14yrs) coding, and Empower, which has partnered with Ngee Ann Polytechnic to teach girls (18 - 24yrs) the basics of artificial intelligence. Ayesha is also the Founder of Squad, a global collective for women who want to learn, build and invest in crypto, web3 and NFTs.

Ayesha serves on the Board of Sport Singapore, the lead government agency tasked with developing a holistic sports culture for the nation.

Prior to founding ADDO AI, Ayesha spent more than a decade on Wall Street developing large scale trading, risk management and data analytics systems. Ayesha was co-founder of the Hybrid Reality Institute, a research and advisory group established to analyze the social and economic impact of accelerating technologies.

Ayesha is author of Straight Through Processing (2008) and co-author of Hybrid Reality: Thriving in the Emerging Human-Technology Civilization (2012). She has been published and quoted on technology, innovation and smart cities in The New York Times, BusinessWeek, TIME, Newsweek, Forbes, Harvard Business Review, Strategy+Business, and Foreign Policy.  She has presented at major financial, technology and other industry conferences, provided high level government briefings, chaired symposiums such as AI Asia, and spoken at TEDx events.

Ayesha has a BA (honors) in Economics from Harvard University, an MS in Operations Research from Columbia University and a PhD in Information Systems (focused on digital innovation in smart cities) from the London School of Economics.