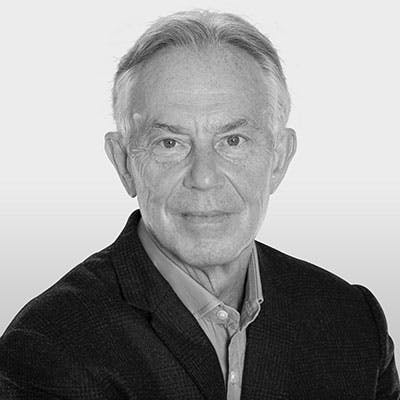 Tony Blair served as Prime Minister of Great Britain and Northern Ireland from 1997 to 2007 - the only Labour leader in the party’s 100-year history to win three consecutive elections.

During his time in Downing Street Tony Blair implemented a major domestic reform agenda. Through record investment and reform, the UK’s education and healthcare sectors were transformed. The New Labour Government led by Tony implemented the largest hospital and school building programme since the creation of the UK’s welfare state.

Overall crime was reduced by a third, and the first ever national minimum wage was introduced. There was also transformational progress on human rights and equality and all of this took place during a period of record economic growth and levels of employment.

As Prime Minister, Tony Blair was also a central figure on the global stage. He helped bring peace to Northern Ireland, securing the historic Good Friday Agreement in 1998. He was a passionate advocate of an interventionist foreign policy. Tony created the Department for International Development, tripled the UK’s foreign aid to Africa, and introduced landmark legislation to tackle climate change.

Since leaving office Tony Blair has spent most of his time working on three areas: supporting governments to deliver effectively for their people, working for peace in the Middle East, and countering extremism.

He established the Tony Blair Institute for Global Change to work on some of the most difficult challenges in the world today, believing that real leadership has never been more necessary or more difficult.

Currently, teams from Mr. Blair’s Institute are directly supporting leaders across the globe in their fight against Covid-19, delivering analysis and advice to help countries mitigate the economic impact, to harness the power of technology and to better position themselves for the rebuilding to come. Find out more about the recent work of his Institute here.