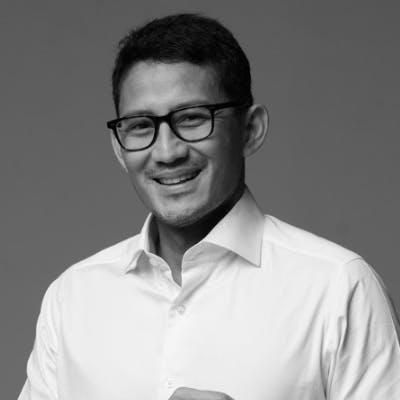 Previously, Sandiaga was elected as Vice Governor of Jakarta 2017-2022 and served from October 2017 to August 2018. He ran as a candidate of the Vice President of the Republic of Indonesia in the 2019 election.

Sandiaga was one of Indonesia’s most prominent young entrepreneurs and active in the Indonesian business communities. He is the co-founder of PT Saratoga Investama Sedaya Tbk., the first and the biggest publicly listed active investment company in Indonesia and served as a President Director 2004 - 2015. He has led the investment firm to have a solid track record of profitable investments across key sectors of the Indonesian economy.

Sandiaga has passion in empowering young entrepreneurs, creating to support in Small Medium Enterprises and giving microloans to thousands of Indonesians. Since 2005, he has been active as social entrepreneur and serves as Chairman in several well-known associations and foundations in Indonesia. He founded a social movement in job creation through training and mentoring in entrepreneurship. Until today, he continues to focus on increasing job creation especially in Small Micro Medium Enterprises sector.

In October 2016, he received a title of Distinguished Research Professor in Residence from the George Washington University.