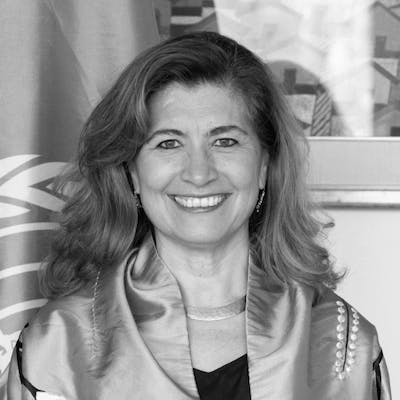 Assistant Director-General for the Social and Human Sciences, UNESCO

Gabriela Ramos is the Assistant Director-General for the Social and Human Sciences of UNESCO, where she oversees the contributions of the institution to build inclusive and peaceful societies. Her agenda includes the achievement of social inclusion and gender equality, advancing youth development; promotion of values through sports; anti-racism and anti-discriminatory agenda and ethics of artificial intelligence. Her appointment at UNESCO allows her to continue supporting an agenda of inclusive growth, and the respect of human rights and human dignity.

Prior to this position, Ms. Ramos served as the Chief of Staff and Sherpa to the G20/G7/APEC in the OECD, contributing to the global agenda as well as leading the OECD's

In 2019, she launched the Business for Inclusive Growth (B4IG) platform, bringing together 40 major multinational companies committed to reducing inequalities. Previously, she was Director of the OECD Office in Mexico and Latin America and a member of the Mexican foreign service.

In 2013, she was decorated with the Ordre du Merit by the President of France. Her work to promote gender equality earned her the 2017 and 2018 Forbes Excellence award as well as being included as part of Apolitical’s 100 Most Influential People in Gender Policy in both 2018 and 2019. She is a Fulbright and Ford McArthur fellow, and a graduate of the Ibero-American University of Mexico City. She is member of