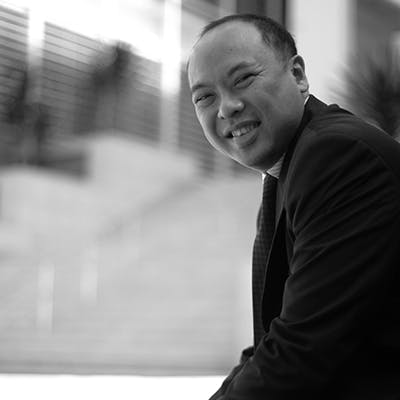 Professor Chee Yeow Meng is Professor of Industrial Systems Engineering & Management, and Associate Vice President (Innovation & Enterprise) at the National University of Singapore (NUS). He received the BMath, MMath, and PhD degrees in computer science from the University of Waterloo in 1988, 1989, and 1996, respectively.

Prior to his tenure at NUS, Professor Chee was Head of the Division of Mathematical  Sciences (2008-2010), Chair of the School of Physical and Mathematical Sciences (2011-2017), and Interim Dean of the College of Science (2018-2019) at the Nanyang Technological University.

Prior to entering academia, Professor Chee has held senior positions in public service,  including Head of Security (Information Infrastructure) and Assistant Director of  Internationalisation at the National Computer Board, Deputy Director of Strategic Programs at the Infocomm Development Authority (IDA), and Program Director of  Interactive Digital Media R&D in the Media Development Authority, where he was  responsible for a $50M fund that supports digital media research in Singapore  universities. He deployed South East Asia’s first certification authority Netrust in 1997, and also founded the Singapore Computer Emergency Response Team (SingCERT).

He has represented Singapore in various international forums, including member of the  APEC Electronic Commerce Task Force in 1998, member of the ASEAN Coordinating Committee on Electronic Commerce in 1998, member of the Working Group on ASEAN Information Infrastructure in 1999, secretariat of the Canada-Singapore IT Joint Council in 1998, co-Chair of the APEC TEL Public Key Interoperability Expert Group in 1999,  secretariat of the Australia- Singapore ICT Joint Council in 1999, and a member of APEC  Project DARE (Data Analytics Raising Employment) Advisory Board in 2017.

Infrastructure Standards Security Working Group in 1997, a member of the E-Commerce  Hotbed Policy Committee’s Legal, Regulatory and Enforcement Study Group – the group  that drafted Singapore’s Electronic Transactions Act, a member of MOE’s Evaluation Committee for R&D Programme on IDM in Education in 2007, a member of the Smart Solutions Committee of Singapore Corporation of Rehabilitative Enterprises (SCORE) in 2015, and a member of the Core Group of NRF’s Singapore Data Science Consortium in  2016.

In 2000, Professor Chee began his entrepreneurial journey as a co-founder of a spin-off company, Unfinity Pte Ltd, from IDA. He went on to found a few more startups: Idea Foundries Pte Ltd, Canvas Ventures Pte Ltd, and Netorics Pte Ltd, before returning to  public service, and eventually joining NUS. He continued to be involved in startup  companies and have spun off Matchimi Pte Ltd in 2014 and Mentum Pte Ltd in 2017. Professor Chee was on the judging panel of the Singapore IT Federation Awards in 2011  and 2012, and a member of the iJam Expert Panel of the Singapore IT Federation 2011-2013.

Professor Chee is a Fellow and Council Member of the Institute of Combinatorics and its Applications, and a senior member of IEEE. His research interest lies in the interplay between combinatorics and computer science, especially coding theory, extremal set  systems, and their applications.