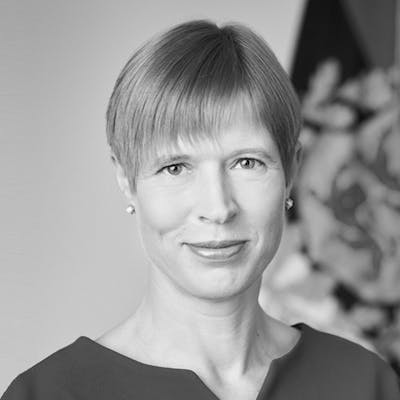 President Kaljulaid is a supporter of a nonrestrictive legal space for the ongoing digitalization of economies and governments. She is an active promoter of sustainability and halting climate change. She advocates for publicly speaking up against violence andfor giving a voice to those affected by it.

In 2016 Kersti Kaljulaid was elected President of the Republic of Estonia. Previously she served from 2004to 2016 as a Member of the European Court of Auditors. Kersti Kaljulaid was the CFO and CEO of the Iru Power Plant of state-owned energy company Eesti Energia and prior to that Prime Minister Mart Laar's Economic Advisor. From 1994 to 1999 she held different positions in investment banking and in the telecom sector.

Kersti Kaljulaid has graduated from the University of Tartu in the field of genetics in the Faculty of Natural Sciences and she has a master`s in Economics and Business Administration. She is fluent in English and French and also speaks German, Finnish, Russian.

Kersti Kaljulaid is married and has four children.