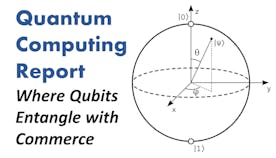 The Quantum Computing Report (QCR), established in 2015, is the leading and most authoritative website devoted to the quantum computing industry. Articles in the Quantum Computing Report have been referenced or quoted in major national and international media outlets including the Washington Post, CNBC, Forbes, Scientific American, The Economist, Nature Magazine, The Guardian, TechCrunch, Fast Company, Gizmodo and many others. The QCR has the highest quality reader base including quantum industry executives, venture capitalists, government policy analysts, U.S. Congressional staffers, enterprise end users, and researchers from academic, commercial, and non-profit organizations with thousands of viewers in over 150 countries.